Roydon Polythene (Exports) manages the recycling of waste materials such as plastics, paper, metal and WEEE at government or environment agency registered facilities.

It’s Swinton operation is fully licensed by the Environment Agency, with a large dry storage area of 13,000 square metres that handles in excess of 50,000 tonnes of mixed dry recyclable waste each year.

The materials handling operations are intensive, with forklifts working 24 hours a day from Monday to Thursday and daytime hours on Fridays.  The plastic bottle sorting line handles 100 tonnes per shift, with forklift trucks transporting between 160 and 180 tonnes of plastic bales each day.

Reliability and strength were the two biggest criteria for site manager Graham Stanhope when the business decided to replace its older forklifts.  These were breaking down too often, resulting in lost time and inefficiencies.

After calling on CESAB dealership Global Material Handling for advice, Graham decided to trial a CESAB M325 forklift for one year, to assess its levels of reliability.

We had no issues with the truck whatsoever and didn’t need to call the engineers out once.  The CESAB truck was popular with our operators.  They found it easy and comfortable to use.

There are now four CESAB M315 diesel forklifts, one Cesab M318 diesel forklift and two M325 diesels in use at Roydon Polythene.  One of the CESAB M325’s has been fitted with a Bolzoni bale clamp and another with the Bolzoni fork clamp, enabling them to transport plastic bales around site, load containers or curtain sided vehicles and feed stock onto conveyor belts.

Ergonomics are central to the design of the Cesab M300 range, helping to reduce fatigue and physical strain for operators.  This ensures more productivity and better performance throughout shifts.

We’re delighted with the performance of the CESAB M300 range and the impressive levels of service from Global Materials Handling, which boosts our operational efficiency and delivers maximum productivity.

The strong, dependable CESAB M300 range delivers consistent high performance responsibly, with a smooth transition of power from engine to wheels thanks to a torque convertor transmission.

CESAB trucks transport between 160 and 180 tonnes of plastic bales at Roydon each day. 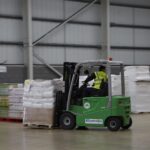